Aerial photograph taken in 1975, around the time the channel would have been cut (marked by red arrow)

Sometime in the 1970s an artificial channel was created through the coastal berm between Leap and the old Elementary school at  Pilyuul in Walung (opposit Srukames Island). The purpose was to create a shorter drainage path (the natural outlet was at Infal Panyea  further west) to improve drainage of the low-lying swamp land behind the coastal berm.

However, the opening of the channel also allowed sea water to flood the area when the tide was rising. The effect of this has been  to: 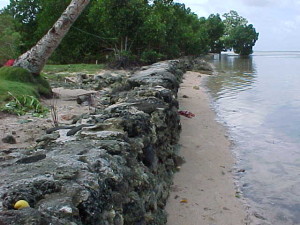 There have been a number of attempts to close the channel by using coastal defences such as gabions all of which have been unsuccessful.

Other areas on Kosrea with similar issues

Flooding of wetland and agricultural land at Pukensukar, south of Malem, has resulted in requests for an artificial drainage channel  to be created. The issues relating to the Pukensukar channel are summarised in the following assessment: