The causes of the coastal erosion problems on the north-east coast of Kosrae stems back over a number of decades before the Sandy Beach Hotel was constructed, relating to the removal of large quantities of coral rubble from the intertidal fringing reef during the initial development of the circumferential road. However, it was during the widening of the circumferential road in the late 1980s that problems began to occur. 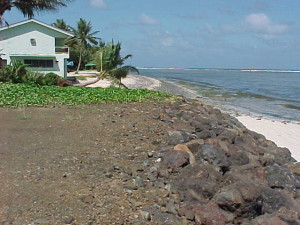 Widening the road extended it on to the upper part of the beach with some rock rubble protection installed to protect the road. This rock quickly moved off west due to the prevailing wave induced longshore transport, resulting in a layer of black volcanic rock covering the white sand beach fronting the hotel. Over the subsequent decade various gabion defences were installed to protect sections of the road, with the length of the defence ever increasing. However, due to the exposed nature of the north-east coast, the gabion baskets quickly broke down, releasing more volcanic rock that ended up covering the beach at the hotel resulting in a legal trial concerning the removal of the rocks from the hotel frontage.

Closure of the Insrefusr Channel to the east is unlikely to have been a major factor contributing to the erosion at Sandy Beach. 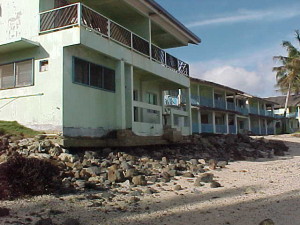 A more substantial and longer rock armoured revetment was completed in 1998 which extended to the eastern boundary of the Sandy Beach Hotel. In the months following the construction, accelerated erosion occurred immediately to the western end of the rock revetment, undermining the Sandy Beach restaurant foundations and resulting in a net loss of beach along the entire frontage of the hotel. High tides and waves during December 1999 resulted in further loss of beach along the Sandy Beach frontage threatening most of the hotel property.

Returning the sand to the Sandy Beach Hotel

In 2000 the owner of the Sandy Beach Hotel successfully won a court case against the State of Kosrae. Part of the judges decision was that the state had to return the sand to the Sandy Beach frontage (rather than just place more rock armour which would have simply moved the downdrift erosion further west. A design based on a rock breakwater and replacement beach nourishment to create a “static equilibrium bay” was developed by the DRC and constructed in 2001. To date the beach has remained in place, protecting the hotel buildings and has avoided exacerbating any

Other areas on Kosrae with similar problems

Similar problems as occurred at the Sandy Beach Hotel will occur if seawall or revetment type structures are built over the beach on most of the open coast of Kosrae, particularly: