Seasonal forecasts (for next few months) for sea levels and rainfall for Kosrae produced by the Pacific ENSO Applications Centre (PEAC) suggest that:

Further information is available from the Pacific ENSO Update newsletter.

The tide calendars for June, July and and August (tide prediction + seasonal sea-level forecast), are now available in both English and Kosraean. These can be downloaded below:

The three month seasonal forecast of highest daily tides and dates of extremely high tides is only available in English:  Dec-2013-Feb-2014-Seasonal

In addition to the Pacific ENSO Applications Centre, forecasts of sea level variability over the coming months are also available as an interactive map from the Australian Bureau of Meteorology. The figure below shows the sea level anomaly over the December to February period (relative to the 1981-2010 average) over the western Pacific. Over the next 3 months, this suggests a sea-level anomaly in the region around Kosrae of between 5 cm to 10 cm (2-4 inches) above the 1981-2010 average (which is a little lower than the PEAC estimate). 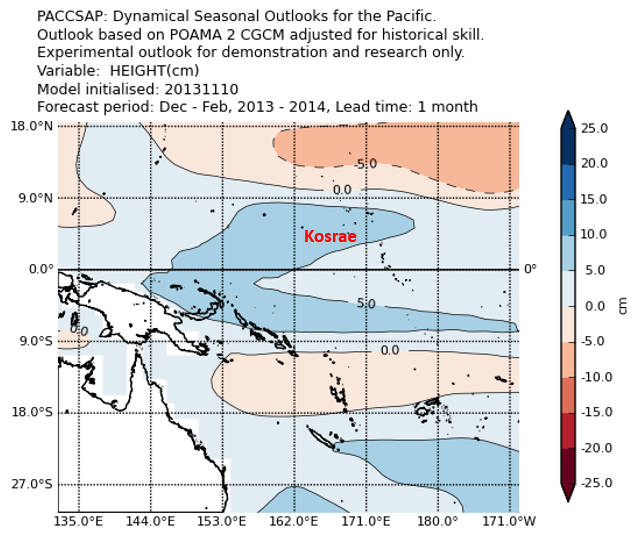