The typhoon that hit Kosrae on the 19 April 1905 was the last typhoon to cause major damage to the island, albeit there have been a  number of near misses over the subsequent 100 and more years.

The typhoon caused damage on many of the islands in the FSM. A detailed summary is provide in the book Typhoons of Micronesia (Spennemann, 2004) who also reconstructed an estimate the cyclone track based on the various accounts. Spennemann estimated from the wind directions that the typhoon passed over the south of Kosrae or just the south of the island. However, given the winds were initially from the west, turning north-west, north and then from the north-east as the typhoon passed over, it may have initially being tracking to the south-west, or south before bending around and tracking west. Based on the damage it is estimated to have been around a category 3 typhoon.

After the typhoon moved west from Kosrae it went on to cause considerable damage and destruction Pingelap, Mokil, Pohnpei, Pakin and Ant Atolls, Oroluk, Minto Reef and East Fayu before continuing on to the western Caroline Islands damaging Murilo, Nomwin, Namonuito, islands in the northern parts of Chuuk lagoon and Gaferut (Spennemann, 2004). 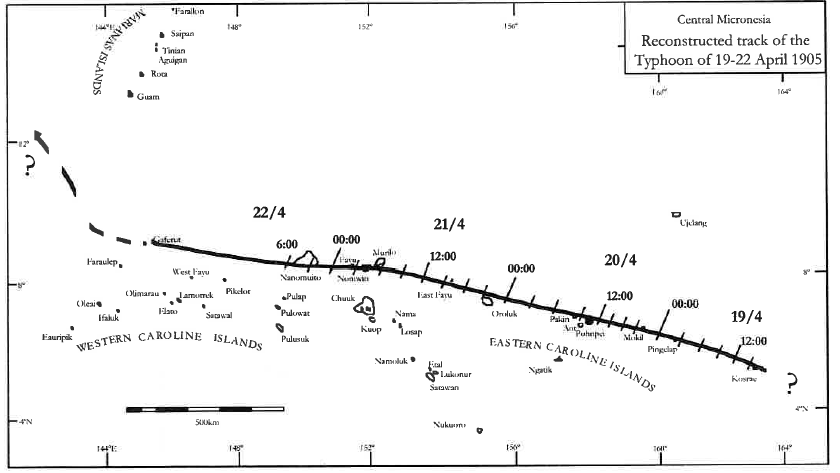 A terrific cyclone swept over the island on the 19th of April. The fury of the elements was terrible. About 7:30 a.m. the ship was driven across the harbour, dragging her anchors. and remained lodged against the rocks, scraping and bumping incessantly. The duration of the storm was about seven hours. But although so much shorter than the hurricane of fourteen years ago, which lasted three days, the work of destruction was in the present case more complex.

We lay that night on the sandy reef, but in the morning, with the help of kedge anchors and lines, the ship was pulled off, and we were soon at our usual anchorage. Thousands of dead fish floated by, whipped to death on the coral, doubtless – and poor, bewildered birds wheeled and fluttered all about us and over the stricken swamp crying and calling.

The storm was a cyclone and struck us first from the northeast. Then there was dead calm, perfectly breathless, when the center passed, and then it came in double fury from the southwest. It picked up the whole house and carried some five feet bodily, setting it down with a crash on to the stones, which broke through the floor and I fully expected we would all be buried alive then and there. All the doors and windows stood on the bias. The lamps shattered on the floor, and the heavy bookcase in the dinning room fell on its face…………The air was black with flying things. A number of the boys laid hold of me, and we all started down the path before the wind. Something struck the whole back of my head, and things looked black for a minute. Then the wind lifted me off my feet and I had to sit down of the ground to keep from being carried away.

You will have been informed by cable of the destruction of our mission property on Kusaie by storm. It happened on April 19th, and lasted only about four or five hours in its severity but it perfectly devastated the island. We are living in my workshop. Five of the Kusaiens were killed. All houses were blown down – most personal property damaged or lost.

The churches were all unroofed, one of them entirely destroyed and two others have the walls seriously damaged. The people will not be able to erect houses until a new crop of thatch leaves can grow and mature. This will probably require more than a year. Their food trees are perfectly bare, beheaded and uprooted by the thousands. Happily they do not depend entirely on food which grows above the ground and so will be able to subsist until coconuts, bananas, and breadfruit begin to bear again. The beauty of the island is gone, and it will require years for it to reach its former splendour.

In The Sleeping Lady Awakens (Segal, 1989) notes an additional account by Teodore Crosby:

“……….the island was brown as though a fire had swept by; trees were beheaded and uprooted by the thousand……..The mission destroyed…..house, everything we owned, gone with the wind…..”

Spenneman (2004) provides a summary of the damage:

Segal (1980) also notes that with this and the previous typhoon in 1891, traditional house building construction was ended and the skills lost.

Spennemann, D.H.R. 2004. Typhoons in Micronesia. A history of tropical cyclones and their effects until 1914. Division of Historic Preservation, Sapian, CNMI.